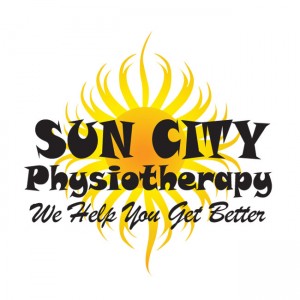 Services are always more difficult to promote than products, especially when it is a medical service.

But we love a challenge!

In this case, Sun City Physiotherapy already had an established brand, a solid reputation and referral service within the medical community, and was widely known in the marketplace. The goal, now that they were established, was to reach out to the broader market – the client or consumer.

We broke away from the original educational campaign that talked about Physiotherapists being university trained, and highly skilled medical professionals, to a more “it’s about me” campaign. In short, we presented an injury or ailment a person might have, and promoted, “it’s one of our specialties”.

One philosophy to which we hold fast is that we should say no more than we need to say in an advertising message. I’ve heard (and sadly had to write) 60-second commercials that go on an on about nothing, while promoting many things. For Sun City Physiotherapy, the approach was very focused. It was “get in, say it, get out”. So we did a series of 15-second commercials. Each commercial is one thought. Then, because we wanted to hold rate with the existing buy, we chose to piggyback the 15’s into 30-second commercials. Effectively, we’ve doubled our impressions on radio.

So…the creative. Well, a little light-hearted humour supported by some comedic sound effects, and a direct announcer message about Sun City Physiotherapy’s ability to “help you get better”. No medical terminology, no promotion of higher education, no “we’re the best”. Just “we help you get better”.

In partnership with Astral Radio in Kelowna, BC, we deliver the message to a dominant piece of market share, and continue with a regular TOMA campaign running 52 weeks of the year! In addition to the radio, the commercials carry over to the Message On Hold at all three clinic locations, further cross-branding the message. (We also updated the logo to carry the new slogan for more continuity of message.)

What would we have done differently? At this point, nothing. Everything is on message and on target. And nothing is nicer than a happy client!

Here are three of the piggybacked commercials we completed for the 2012 branding campaign. In total, six 15-second commercials. Six distinct messages. Six consistent promotions of the brand. (All creative is copyright Great Creative.com 2012 and is protected by international copyright laws. It may not be copied or reused without written permission.)